The Poster Prize for Illustration 2019 Winners

The winners of the prestigious Poster Prize for Illustration 2019 awards have been announced. The competition, which is open to illustrators and students of illustration around the world, is organised by the Association of Illustrators (AOI) and London Transport Museum.

Artists were invited to respond to the theme of London Stories and create an illustration that visually captures a well-known or obscure London narrative; stories that are contemporary or historical, real or imagined. Over 1,500 illustrations were submitted by professional artists and students worldwide. An exhibition in the Museum showcases 100 of the best which were chosen by an independent panel of judges made up of experts from the art and design world. The illustrations will be on display in the Exterion Media Gallery until 14 July 2019.

Visitors will be able to enjoy a breadth of interpretations of London Stories - from urban myths, historic events and remarkable characters, to daily lives and adventurous animals, the exhibition offers new perspectives and insights into the cultural history and heritage of London.

London Stories reveals the wealth of real and fictional tales and events inspired by, or having taken place in London, and embraces the quirky, amusing and bizarre as well as the day to day aspects of life in the capital.

The winning illustration will be displayed on London Underground poster sites for millions of passengers to see during the spring. Each winner will receive:

Jason Cotterrell, Group Chief Strategy Officer and UK Managing Director, Exterion Media, and one of the judges, said: “The standard of entries was extremely high and there was much debate about the need for both artistic excellence and suitability as a communications tool. A poster has to tell a story in an instant, capturing attention and inspiring the imagination. The entire judging panel immediately saw the winning entries as not only excellent pieces of art but also posters.”

There’s also an opportunity for visitors to vote for their favourite poster illustration in the Exterion Media gallery, where the exhibition takes place. The winning illustration will be announced in June and permanently accessioned into London Transport Museum’s collection.

Prices for adults start from £16.00 online. Save money by booking online in advance at www.ltmuseum.co.uk. Tickets allow unlimited daytime admission to the Museum galleries and temporary exhibitions for a whole year from the date of purchase.

Illustration: London is the Place for Me

70 years ago the Empire Windrush arrived at Tilbury Docks, with Lord Kitchener on board, singing his song, London is the Place for Me.

An original screen print gives the illustration a beautifully crafted feeling fitting to such a poignant story.

Eliza started out as an architect but after a few years in practice had to admit that she was much better suited to being an illustrator, and switched career about six years ago. She quickly found a niche market in cycling themed work, but has gone on to draw all sorts of subjects mostly featuring people. She specialises in screen printing and produces a variety of limited editions every year for galleries in the UK and overseas, in addition to her illustration commissions. In short, she has much more fun drawing pictures than designing stadium car parks. Eliza had previously won the Bronze award in Places and Spaces 2015.

Cockney: Originally from Cokeney, a 14th century word for ‘Cock’s Egg’, that is, a small or defective one. A disparaging term for a town dweller regarded as affected or puny by rural Englishmen.

This is the perfect answer to the brief the artists were given as it picks out a London specific story and literally translates it to an image. Beautifully and subtly executed with attention to detail that only reveals itself to the observer on closer inspection: the cockerel standing on an egg shaped map of east London.

Anna studied at the Kent Institute of Art & Design, and Bath College of Higher Education, and is now a freelance illustrator and lecturer living in London.

I have been inspired by a story about the Becontree’s Tube station. It’s been said to be haunted by a white dressed woman with blonde hair and with no face, that several staff members have sighted.

All the judges appreciated the skilful artwork and loved the luminosity of the image as well as the intriguing story behind it.

Self-taught Illustrator based in Nantes, France, with an education in Architecture. Mobb works mostly in black and white and with traditional media, especially gel pen, ink pens, nib and ink best suited to his usual graphic approach to the creation of images. Hatching is the technique that's more familiar and interesting to him because of the strong contrast as well as the smooth variety of values range you can obtain from overlapping more layers of the same unity, the line. Mobb often experiments with other media and attitudes to illustration, like in the piece for this exhibition. He created it using a digital painting software, experimenting with colours and an approach that is more pictorial. 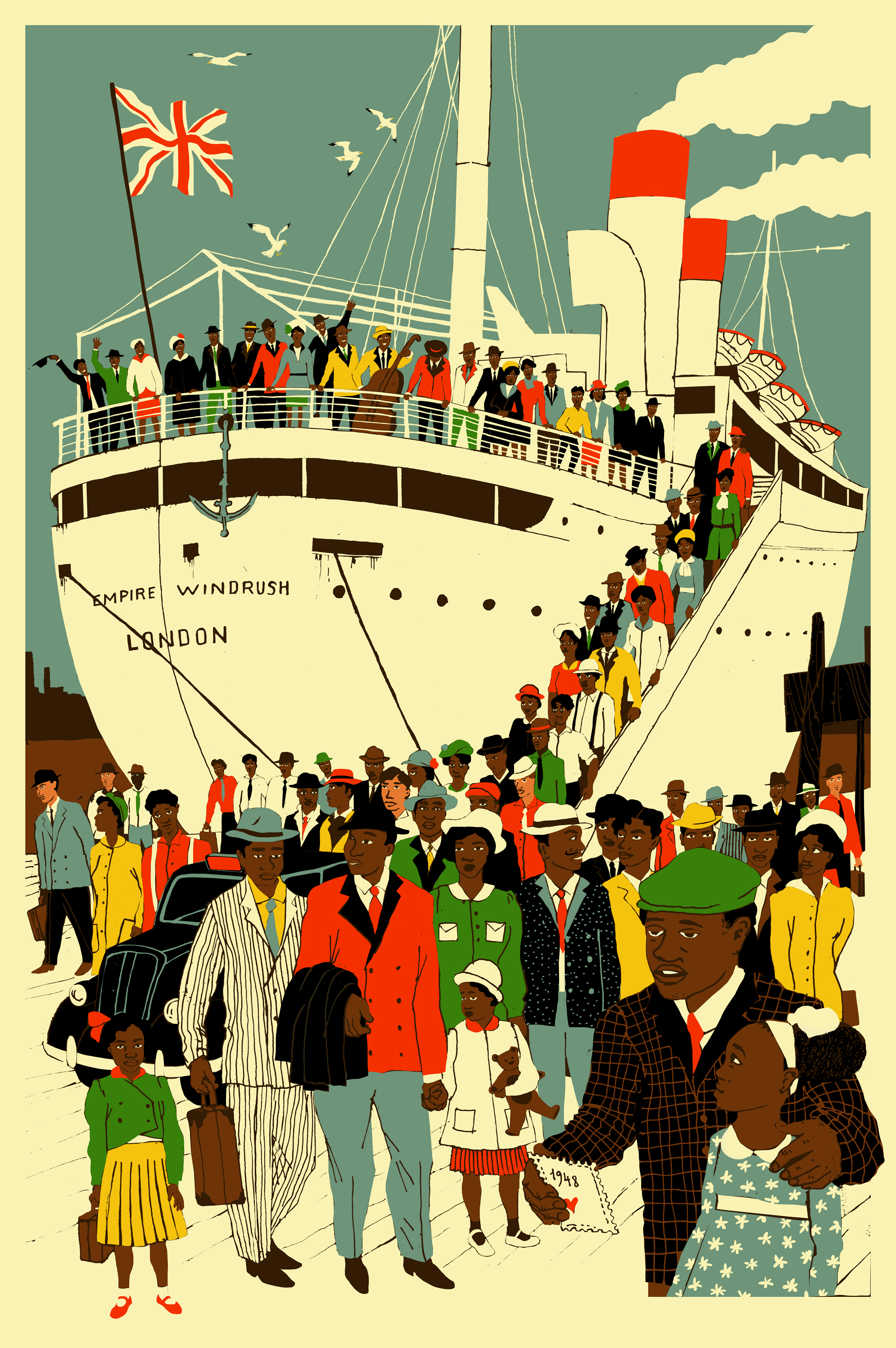 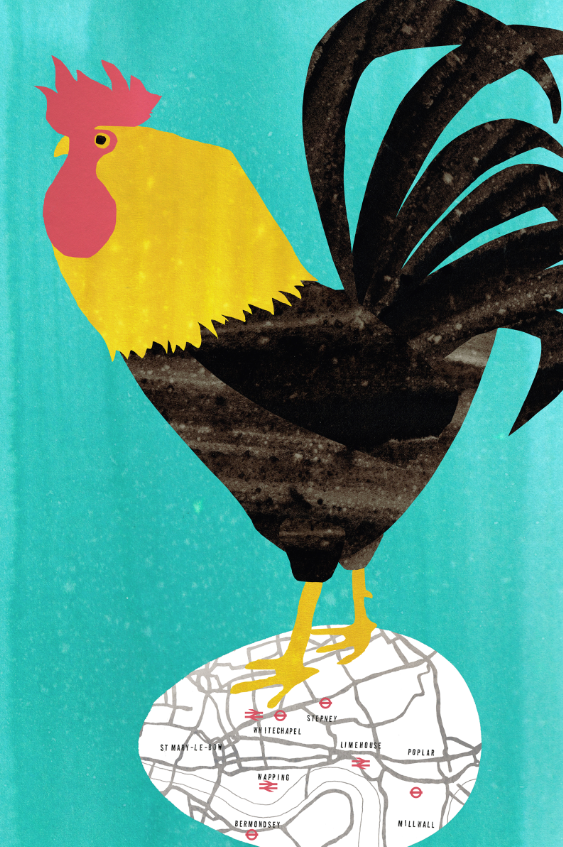 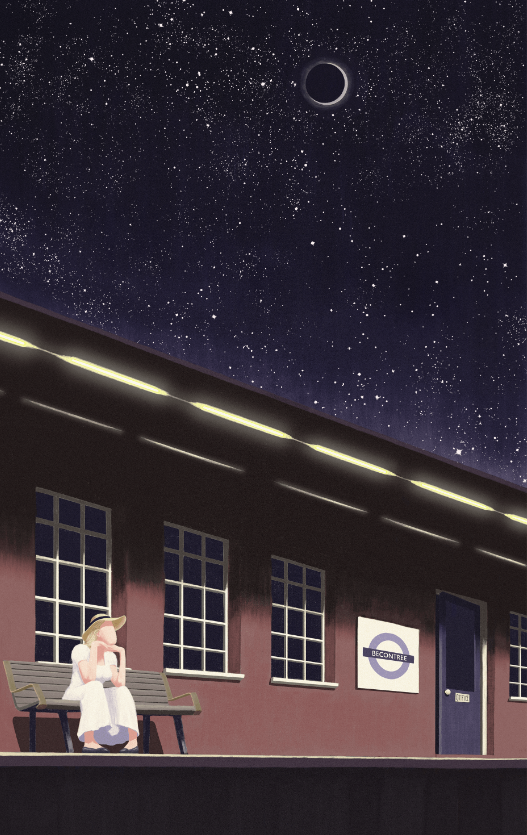