A major study of rail travellers’ online retail behaviour shows that the value of on-train commuter commerce* reached £2.6 billion last year, and is predicted to grow by 75% to reach £4.6 billion by 2022.

The research, conducted by KBH On-Train Media in partnership with Retail Economics, found that £1 in every £25 of total online retail spend is carried out by commuters while travelling by train. The average value of each transaction is £28.19, which equates to £4.87 every day they commute. This is projected to grow by just over 12% per annum on average over the next four years.

KBH On-Train Media and Retail Economics also set out to calculate the overall value of the rail commuter economy* in the study. Rail commuters make up 9% of the adult population, but they contributed 11% of total spending, meaning a greater spend per capita than the average UK household. This therefore indicates that the group has disproportionate economic importance. The research suggests rail commuters contributed £140.4 billion* to the UK economy last year across all areas of consumer spending.

A number of factors were identified as driving the rise of rail commuter commerce, including the increase in on-train Wi-Fi connectivity, ubiquity of smart devices and how consumers feel during their commute. The journey is taking on increased levels of importance as genuine ‘me time’, a convenient time to shop when they are not under any other time pressures.

The number of people behaving in this way was found to be huge; 51% of commuters shop online while they travel and 15% of these active online commuting consumers purchase on the train more than once a week.

These findings support a number of other research projects including OFCOM’s Communications Market Report 2018, which noted how 82% of adults use digital devices whilst commuting; the most popular being the smartphone (71%) followed by the laptop (18%) and tablets (12%).

Ian Reynolds, Managing Director, KBH On-Train Media said: “The on-train audience is an economic power-house, punching way above its weight in terms of spend per capita. All the evidence points unerringly to the fact that successfully capturing the rail commuter market will play a significant part in retailer growth. Total annual online, on-train retail spend is expected to grow by 75% to £4.6 billion in 2022. Shopping behaviours have changed exponentially over the last decade. We expect on-train commuter commerce to surge significantly if broader connectivity challenges on rail are addressed as expected. Our respondents, for example, agreed that they would shop more frequently on the train if there was better connectivity (33%). Likewise, they want to see more retailers prioritise the mobile optimisation of sites and apps to make the shopping experience more seamless.”

Richard Lim, Chief Executive, Retail Economics commented: “The retail industry is undergoing a period of unprecedented change. The rise of the connected-consumer has been the catalyst for a seismic shift towards an emerging digitally-centric customer journey. An informed and ever-connected consumer can now shop at any time of the day or night, while commuting; post reviews instantly; and share their experiences with their friends and online communities across the world. Our research quantifies a significant opportunity for retailers and brands to engage with rail commuters who are thirsty for relevant content during their precious downtime. Indeed, we found over half of consumers were motivated to shop online during their rail commute because they had free time and it was convenient. This time offers a fantastic opportunity for commuters not only to shop on the move, but to discover new brands, research products and plan future purchases. With over half of all online retail traffic already being driven by smartphones, the convergence of better connectivity and more powerful devices will underlie the future growth of rail commuter commerce. This presents a significant opportunity for those retailers who have embraced this change, invested in digital and have really understood the evolution of the connected customer journey.”

*Commuter Commerce: On-train, on-device retail activity by those using the train to travel to and from work.

*The Commuter Economy: The total economic contribution made by the train commuter population to the UK economy 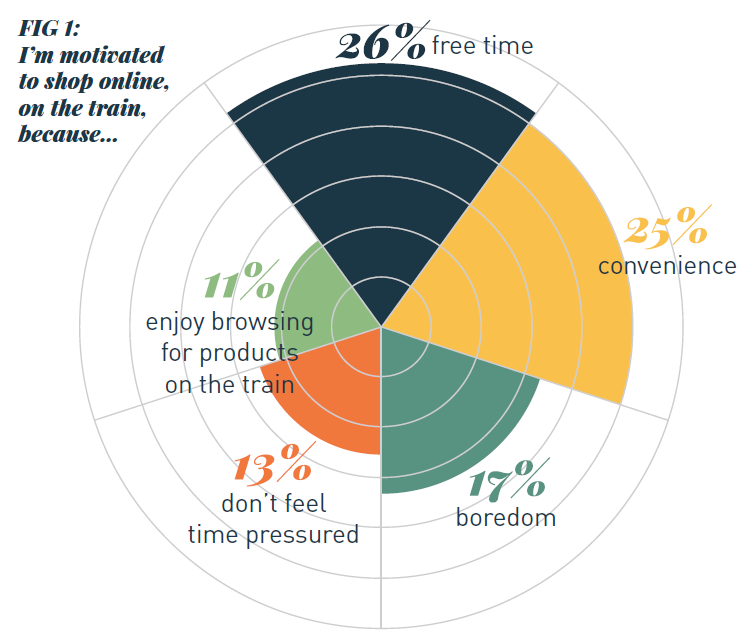