On 1 July 2022, it will be 50 years since the first Gay Pride march took place in Britain. Pride50 is a series of public artworks created to mark the 50th anniversary year.

The project kicks off in January 2022 with four artworks based on true-life LGBT+ coming-of-age stories from the year of the UK's first Pride march - 1972.

Quentin Crisp was well on his way to becoming (in)famous by the early 1970s. Many young people first encountered the possibility of living a queer life through Crisp's autobiography The Naked Civil Servant
and John Hurt's extraordinary portrayal of Crisp in the TV adaptation of the same title.

In 1972, UK law was altered so that television companies were allowed to broadcast during the day. At least one teenager realised her lesbian identity while watching the UK's first daytime TV.

1972 saw the outbreak of the 'Cod Wars' between Iceland and the UK. News reports of burly trawlermen in conflict over fishing rights led one youngster to realise he was gay.

Martin Firrell is a British artist well known for provocative interventions in public space through his long association with the Out of Home industry. He has worked with Primesight, Outdoor Plus, and Clear
Channel in the UK and was Clear Channel’s first Artist in Residence (2018-19).

Firrell will create five further public artworks, in collaboration with Peter Tatchell, to be displayed prominently and nationally by the UK Out of Home industry to mark the day of the 50th anniversary on 1 July 2022.

Each of the artworks will highlight the stand-out challenge facing the LGBT+ community in each of the decades since the first Pride march.

Firrell will use these contributions to highlight what has mattered, and matters, to LGBT+ people and their allies over 5 decades of gay protest and Pride. 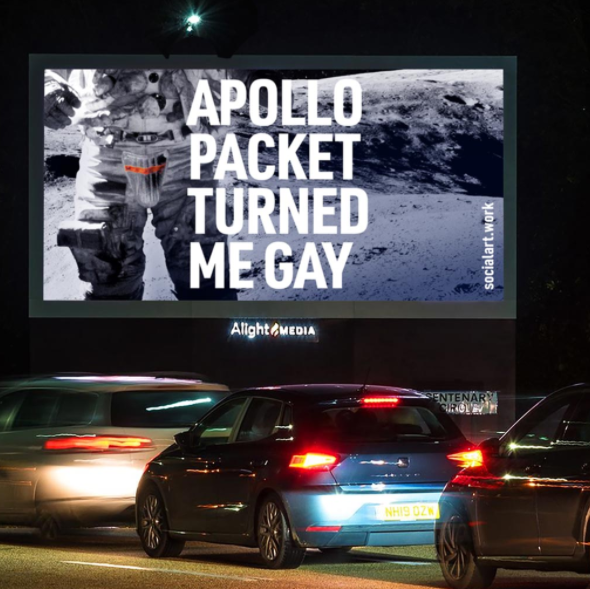