Out of Home has an unrivalled ability to quickly change perceptions through smart targeting and effective creative. A great example of this was a recent campaign launched by the RAF.

The RAF wanted to change young people’s perception of working in the organisation, to encourage recruitment interest and consideration. The key benchmarks were inclusivity and changing perceptions amongst a core audience of 18-24 men, but also to be seen as inclusive regardless of age, gender or ethnicity.

The campaign ran over October 2021 across C-Screens digital network in football stadia and Powerleague - a perfect match for the audience and campaign objectives.

The campaign delivered 2.55 million Impacts across the campaign period. Effectiveness research found 89% of the audience thought it made sense to advertise at Powerleague, 79% said Powerleague was a great way to reach people like them, and crucially 31% were more likely to consider the RAF after seeing the football stadia and Powerleague campaign.

Richard Matthews, Investment Director, Manning Gottlieb commented “In teaming up with C-screens the RAF were able to maximise audience relevance by showcasing their ads across Powerleague sites and football stadia screens. This resulted in a significant over-delivery to an engaged audience and we look forward to working with C-screens again in the near future.”. 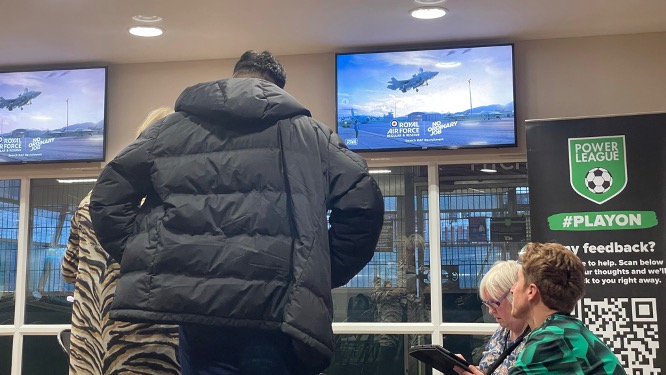