WWF, formerly known as The World Wildlife Fund, is teaming up with TINT and Exterion Media to launch an ambitious Social-out-of-home (SOOH) activation in the London Underground as part of its Earth Hour 2016 campaign. WWF will be displaying all social media content tagged #EarthHourUK across LCD screens in the London Underground, encouraging passengers to declare their support for, and engage in conversation around, Earth Hour.

Climate change has never been more prominent in the media; however, charities such as WWF still need public support to help protect the future of our planet. On March 19th, WWF will once again inspire hundreds of millions of people, businesses and iconic landmarks around the world to turn off all non-essential lights for one hour at 8:30pm to create a symbolic moment and put the spotlight on issues affecting our planet.

From Wednesday 16th March, the organisers will display TINT Boards on 140 of Exterion Media’s LCD screens across the London Underground to collect and curate content shared under #EarthHourUK on social media platforms such as Twitter, Facebook, YouTube and Instagram. Additionally, WWF’s TINT Boards will be online for viewing and interaction on desktop and mobile. TINT is a simple yet powerful platform that lets brands aggregate, curate and display any social media feeds onto any screen – from websites and mobile apps to digital billboards, retail displays and event walls.

WWF’s campaign will bring tube passengers into the conversation, giving them the chance to help drive public support for the campaign. With Wi-Fi widespread in London Underground stations, used to transfer an average of 20TB a day, passengers will be able to engage with the SOOH campaign they see curated in front of them in a way that previously would not have been possible. Exterion Media, Europe’s largest privately held Out-of-Home advertising business, and TfL’s engagement at this level with an emerging social media capability, SOOH, is indicative of their commitment to improving passenger journeys on the network.

Tracey Spensley, spokesperson for WWF said: “To help inspire the nation to take part in this year’s Earth Hour, we were looking for an innovative way to use our social media feeds to engage a mass public audience. TINT and Exterion Media provided us with a dynamic and engaging opportunity to reach out to today’s tech-savvy generations ahead of our global event. We hope that this campaign will encourage more people to show they care about the future of our planet this Earth Hour by switching off their lights for one hour at 8.30pm on Saturday 19 March.”

Stuart Thompson, TINT’s European Director, added: “Social-out-of-home (SOOH) is revolutionising the Out of Home market and it’s never been more exciting. Here at TINT we are thrilled to be working with a global non-profit organisation as significant as WWF to help them reap the benefits of today’s exciting new digital marketing technologies.”

Dan Cresta, Exterion Media’s Director of Partnership, comments “We’ve been working with a number of partners to develop new ways for brands to create compelling content for Digital-out-of-Home (DOOH) and the teams at Exterion Media and TINT have been working hard, along with WWF’s marketing team, to bring this execution to life. We’re delighted to be partnering with both TINT and WWF resulting in the delivery of genuine innovation for WWF’s Earth Hour campaign. This is just the start of the journey, with plenty more campaigns in the pipeline planned over the coming months delivering dynamic social content across our London Underground digital screens.”

The campaign was planned and booked by All Response Media and Open. 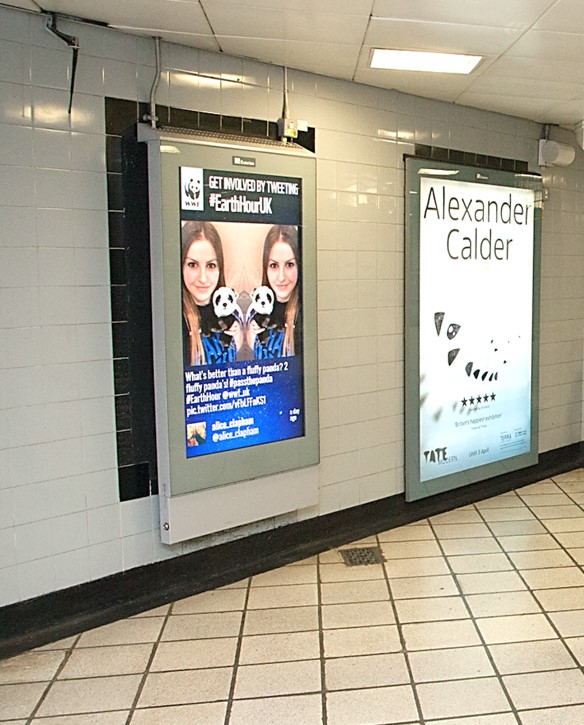